This press installs a shock bushing into an automotive chassis control arm.  The press is capable of processing mirrored variants of the workpiece using the same electro-mechanical press spindle axis.  The machine is tended by two robots.  One robot transfers workpieces from a pallet conveyor to the press station.  The second robot loads bushings onto the press tool with axial orientation based on the workpiece variant. 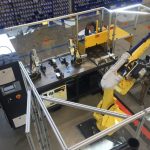 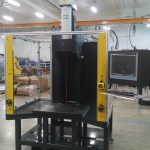