This automated robot cell uses two robots: one to tend workpieces on a pallet conveyor, and one to load bushings onto press tooling.  The pallet robot picks a left or a right mirrored variant from the conveyor and places it in the assembly machine nest.  The bushing robot picks bushings from a step-feeder and orients the bushing axially based on which mirrored variant of the workpiece was loaded in the assembly machine.  The assembly process uses an electro-mechanical press that saves press curve data of each workpiece for process feedback.  The cell reads the RFID chip on the conveyor pallet for current part status, and then writes the new part status back to the chip after the assembly process is complete. 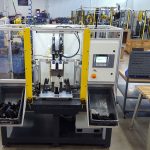